Cartoons on President on show

The many faces of the first citizen 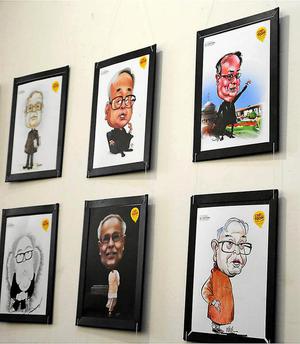 Impressions: An exhibition of 111 cartoons on President Pranab Mukherjee is on in Kochi.   | Photo Credit: H_Vibhu

Cartoons on President on show

Ahead of President Pranab Mukherjee’s visit on March 2, an exhibition of cartoons on the dapper politician-turned-statesman has travelled all the way from the Rashtrapati Bhavan to the city.

The show, featuring 111 cartoons on Mr. Mukherjee, was inaugurated by his press secretary Venu Rajamony at the Orthic Creative Centre on Karikkamuri Crossroads on Tuesday. Jointly organised by the gallery and the Kerala Cartoon Academy, the exhibition titled ‘Cartoon Pranam’ is on its maiden show in the State.

The cartoons on the President happened by chance. Soon after Mr. Mukherjee assumed the top office at Raisina Hills, a group of cartoonists from Kerala called on him with a set of his caricatures. During the conversation, they told him about cartoonist P.K.S. Kutty’s demise a year ago and asked him if he could deliver a memorial lecture on Kutty on his death anniversary, with whom the President had a warm relationship.

He was also asked if he would mind the exhibition containing cartoons on him, even critical ones, but he had no qualms about it. There were protocol issues involved, but Mr. Rajamony pitched in to straighten them out. Eventually, they put together 111 cartoons for a show at the Rashtrapati Bhavan on the death anniversary of cartoonist Kutty in 2012. Besides senior leaders from Kerala, 84 of the cartoonists who drew the President took part in the event. The exhibition was inaugurated by Mr. Mukherjee and the works became part of the Rashtrapati Bhavan’s permanent collection.

The works were also compiled in a volume with the same title. The exhibition was held again at Vigyan Bhavan in Delhi on the occasion of the National Media Day.

The cartoons have captured the many expressions and features of the first citizen, in great detail. Several traits of Mr. Mukherjee are evident in the works.

The show will be on till March 3.

It is a lavishly illustrated encyclopedia of the cross-cultural legacy between the two countries, highlighting their economic and cultural ties – right down to yoga and museum treasures.

A gentle book on the Dutch-Indian connection

A career diplomat and a scholar of international relations, Venu Rajamony is Press Secretary to the President of India, Mr Pranab Mukherjee.

Any cookies that may not be particularly necessary for the website to function and is used specifically to collect user personal data via analytics, ads, other embedded contents are termed as non-necessary cookies. It is mandatory to procure user consent prior to running these cookies on your website.